Disclaimer: this series for writers/artists has to be fun for me to write or why do it? I may discontinue it at anytime that interest wanes or I feel I am not connecting to you, the reader.

The Tarot is not for everyone, even when used for writers by writers (well one writer, namely me in this case) – or – artists. These posts will be about inspiration as much as anything else that may emerge. I don’t know where this series will go, so if you join me on this “trip” be prepared for the unexpected. I know the end goal is to inspire and inform writers and artists but beyond that, we will have to discover it together. 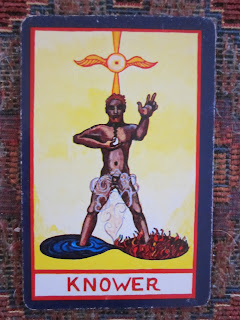 Today I pulled The Knower card (also known as the Judgment card in the familiar Rider-Waite deck on the right) which is the end of the path. You might think the end is not a good place to start but you would be wrong.

Although The Knower card is the end goal of the Nameless-One (aka The Fool), we need to know the end so we know where we are headed. Take that as a metaphor for writing your novel.

Knowing the end before you start helps save a lot of time and dead ends.

You have an inspiring moment when you get an idea for a story—but then what?

Learn about motivation. What motivates your character?

Know your character(s) well before you start your story.

Then, we have to start at the beginning (not that far back—the beginning of the problem). We don’t want back story right now—agents and editors call it info dump and hate to see it up front.

The Fool (the main character and/or the writer) starts out without care or concern, moving into his life story to begin his journey, not knowing of the pitfalls and dead ends or the predators that lie in wait to trip him up. He is the spinner of his own story.

The books and maps are in his knap sack but he has not opened it to learn of the dangers along the way. He needs to be re-born by and during his journey (we are not talking about religion or past lives—posts on past lives will come later). He needs to find the strength, knowledge, courage (etc.) within himself to solve the problems that he will face—or not. 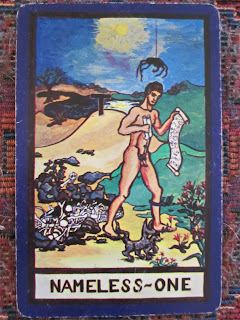 What is exciting about pulling this card is that it represents the NOW—not hundreds or thousands of years ago when these cards may have first been conceived. The spider above the Nameless-One is the Cosmic Spider (spinner of the web of destiny) and is in constant motion. This is also the motion of the writer or the writer in motion—spinning the story to capture the reader.

When we write without having read our own scrolls, as The Fool in the older deck, (and the scrolls of others) we come across as feckless or being without authority; writing words without having experienced those words—a spinner of tales that have no depth or meaning.

Think of the action movies that hide their lack of meaningful plot with lots of chases, guns, explosions, sex and running; lots of emotions without purpose, like they were thrown into a mixer and spewed out in the guise of being a story.

Anyone can be a writer, but the people who have something to say will have the better story and if that person also studies his craft, he will become the better author/writer who lasts past one or two books, or one or two blog posts.

Write to reveal your story, or, know the end and work toward it—the path is your choice because you are the Nameless-One who finds the story and its end.

(Note: the Nameless-One is the New Age deck that now shows the Fool reading his scroll—he got smart and is doing his research before his trek—or maybe he's checking his old fashioned map/GPS to find the best path—not sure which).

Do you like the older Rider-Waite deck of The Fool and Judgment or the newer (New Age) deck of the Nameless-One and the Knower?

Do you write the story as you go, or do you know the end when you start?

I tend to write the story as I go. Personally I prefer the Robin Wood deck, although I have used many others over the years.

I write as I go, but I HAVE to know the ending. I spin from the characters. I also enjoy pulling tarot cards for my characters as well as myself. I have a variety of cards, but my celtic dragons are my favorites.

The deck you use is beautiful. I should think about updating.

While writing my first novel I did not know the ending. Now that I'm writing with the end in mind, hopefully it will come a lot smoother.

I had no idea there was a Celtic Dragons tarot deck. I'd better check out the newer decks--they're really lovely.

Hi Cora, which deck are you using? I like the interpretation of The Knower for Judgment. I currently use the The Gaian Tarot by Joanna Powell Colbert (which I think Prudence would also love). The Fool is called The Seeker in that deck. I often consult it for plot points, character reference and just to get the old creative juices flowing. Find it very helpful.

I often have an inkling of my ending going in, but sometimes I'm surprised!

The Deck I showed above is called T:The New Tarot by John Cooke--you can see it here: http://www.aeclectic.net/tarot/cards/t-new/ It was created in 1969 and is out of print.

It is so nice to hear how you use your lovely deck for writing. Thanks for sharing.

Interesting! I didn't recognize it at all. Too bad it's out of print.

I have a gazillion story ideas, but it's the ideas that include a conclusion that I write and develop. The rest of the ideas stay on the back burner, fermenting. Either they will bear fruit, or be forgotten, or an aspect of that idea may end up serving a more developed story.

I find Tarot and Astrology fascinating, though I don't follow or practice either. My knowledge of both is surface at best, but do think both are great ways to gain insight into characterization and motivation, as you've expressed here, Cora. Interesting stuff. And I agree, an end is not simply an end, but the doorway to a new beginning.

I can't say I "use" any deck but I have a Waite-Rider which I've come to like.

I wrote my first mess of a partial novel using the I Ching and have since thought I ought to try Tarot. Maybe since I'm at a stuck point, now's the opportune moment!

This is a timely post as I'm seeing I'm very much like the Fool in my creative life - desiring nothing more than to set off on the journey and experience it fully without regard to the crucial planning. I've definitely worked to plan but have hit so much resistance to find the ending that it's hindered me... so yeah, looks like the cards here are speaking to me :)

I find it interesting that the stories you finish are the ones in which you have an ending in mind. You prove my point, although I don't always follow it. Sometimes an idea grabs me so hard, I write to know the end.

As I mentioned above to Sherry, sometimes a story grabs your imagination so hard, you have to write to find out the end. I, too, tend to like the adventure of starting out without knowing the end. I do that at times with travel as well, I don't want to know where I'm going, I want to just go and see what shows up. The only time that didn't work is a big weekend at the coast when we couldn't find anywhere to stay and had to go back inland to find lodging.