Act Or React, How Do Your Characters Flow?

I had wanted to get this post out on Monday but here it is Tuesday and it's just now coming together. Creativity can't be rushed. That's my new mantra. I refuse to put out a post that my gut/intuition says is not ready. Creativity takes time, at least it does for me. So, on to the next Tarot card and what insight it gives us as writers and artists. 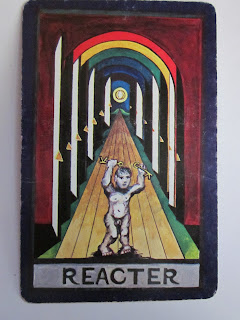 The Reacter is not the Actor, so says the T: The New Tarot deck originators. (The comparable card in the Rider-Waite Tarot deck is The Moon.) This is our next card for my series on Writer-Artist and Creativity. It is about goals, emotions and character.

This post was a surprise. I decided to pull a card rather than go through the cards in sequential order and as a result, I became aware that I would not be going over every card of the Tarot’s Major Arcana on this blog series as I had originally thought. I am planning another project (beginning on Sherry Isaac's blog next month) on past lives, so I will only be doing this series on the Tarot until then. We will find out what cards are pulled together.

The key to creating meaningful characters is that you must know and own your own emotions. The baby on the Reacter card has a set of keys which he can use to go through the seven gates. He can go both ways—in and out. He has gone to the top of the mountain, where the moon resides (emotions and intuition) and is now back, a babe, unencumbered by adult (ego) manipulations. His reactions are genuine. This writer babe does not use artifice to create his characters—he allows them to react naturally. He can do that because he knows his characters very well.

I touched on character development in the last post when I pulled the Knower card. Recently I read two novels by male authors that had the same problem for me; I could not connect with the characters. I grew bored and felt like I was chewing on cardboard when what I wanted was a tasty feast. The writing was excellent, the plots were good, but the characters felt artificiallly manipulated and unreal.

I was reminded of an issue years ago when in a writing/critique group. One male writer in the group could not connect to the women in the class with his female characterizations and responses. He argued with us and would not acknowledge that his female characters did not have genuine reactions and emotions. He left the group without ever understanding or accepting this point.

This is not male bashing in any form.  There are wonderful characters that male writers have created (Harry Bosch by Michael Connelly, Joe Pike and Elvis Cole by Robert Crais, Jack Reacher by Lee Child to name a few of my favorites). Their female characters might not be as strong but we don't mind so much because they are not the point of view characters. The writers make up for it with their strong male point of view and reactions, which we accept because they come across as real, vulnerable and genuine (no matter how outlandish or over the top the situations become). Women love vulnerable males and strong females.

The Reacter tells us that acting is finished (giving lines to our characters and making them say what we want them to say).  Re-acting is the name of the game now (knowing our characters so well that we can trust them to say what they want to say and know it will be right). In order for us as writers to connect with our audience, our characters must be real. To do that we must know them very well; their history, their private thoughts, their successes and failures. They react from the work we've done on their back story (much of which is often never written in that story).

Since most readers are women, and women need to connect emotionally with the characters in a story, if the emotions are not true, we become bored and put the book down (or throw it across the room) for another author that does make that emotional connection.

So, our baby has come back down the mountain with a set of keys that open the doors in front of him. He can go in and out at will, not hung up in ego but able to react naturally.

Eckhart Tolle came to mind when I saw this card. He wrote The Power of Now. We have heard so often to live in the moment; in the now. Well if you want to know the fine points of what it means to live in the Now, read his book.


I also came across a lovely blog post this morning that gives another glimpse of being in the now: A Walk In The Rain

We have left the Moon card behind. No more egos howling at the moon. Now our characters react naturally. We go where the story takes us in its twists and turns, through unknown doorways and scenarios because we have the keys necessary to unlock any door.


Be willing to be the (writer) babe and go through any door your character wants to go through. You might have a better story for it.

Do you agree with this interpretation?


Do you have strongly held beliefs about creating story that differ?


Are you open to letting your characters loose to react as they will, if you have not tried it before?

I agree, Cora - creativity can't be rushed. I can't bring myself to publish a post if I think it's not quite ready. I'd rather throw off my schedule than put out something that is substandard or not flowing for me.

I like to think I let my characters react as they will and prefer to write that way. That said, when I get stuck, I need to go back to my original notes and remind myself of the things that inspired me to write that character's story and journey.

More and more I am finding my way to my own rhythm for blogging. I have to quiet the voices telling me to keep up with other writers and their goals and accomplishments. So I agree with you that I will not put something out that doesn't feel right. I've been getting more writing on my new novel done as a result. I think I'm beginning to agree with Anne R. Allen about slow blogging.