Sometimes we think life is random, making no sense; that things happen to us out of the blue. But I can trace my start as a writer and the beginning of my first book—and my own personal development, to an event that happened in 1987.

Jose Arguelles launched a word-of mouth campaign, called the Harmonic Convergence, asking for ‘Sun Dancers’ to gather near sacred sites around the world at dawn on the 16th and 17th of August, 1987, to hold a global peace meditation—to ‘open the doors’ to the final 26 years of the 5125-year Great Cycle of the Maya (A cycle which began in August, 3114 B.C. and ended on December 2012 A.D).

Without getting into too much detail of the fascinating time keeping/math of the Maya (they calculated the cycles and progressions of planets, galaxies—and universes for all I know—all above the understanding of my math-deprived-brain), here’s the quick skinny:

(Oh and by the way, there are many more cycles, so if you love cycles and math and fractals, you should check out the Mayan’s astronomical skills.)

Arguelles marked the start of the last cycle of 26 years before the end of the Great Cycle, as a moment for collective synchronization to move the earth and the universe to spiral higher in consciousness. The idea of history repeating itself—either one step higher—or a descent lower in our evolution, would be a good analogy. He believed this event had meaning that extended into other dimensions and hoped we could synchronize to the higher level if enough of us got together and ‘dreamed’ it so.

Thus was the impetus that lay in my consciousness for a few years, seeding my novel, Dance the Dream Awake, which had nothing to do with this event, but ignited my imagination because of the trek I took that threw open the doors. I had several déjà vu experiences on that journey. 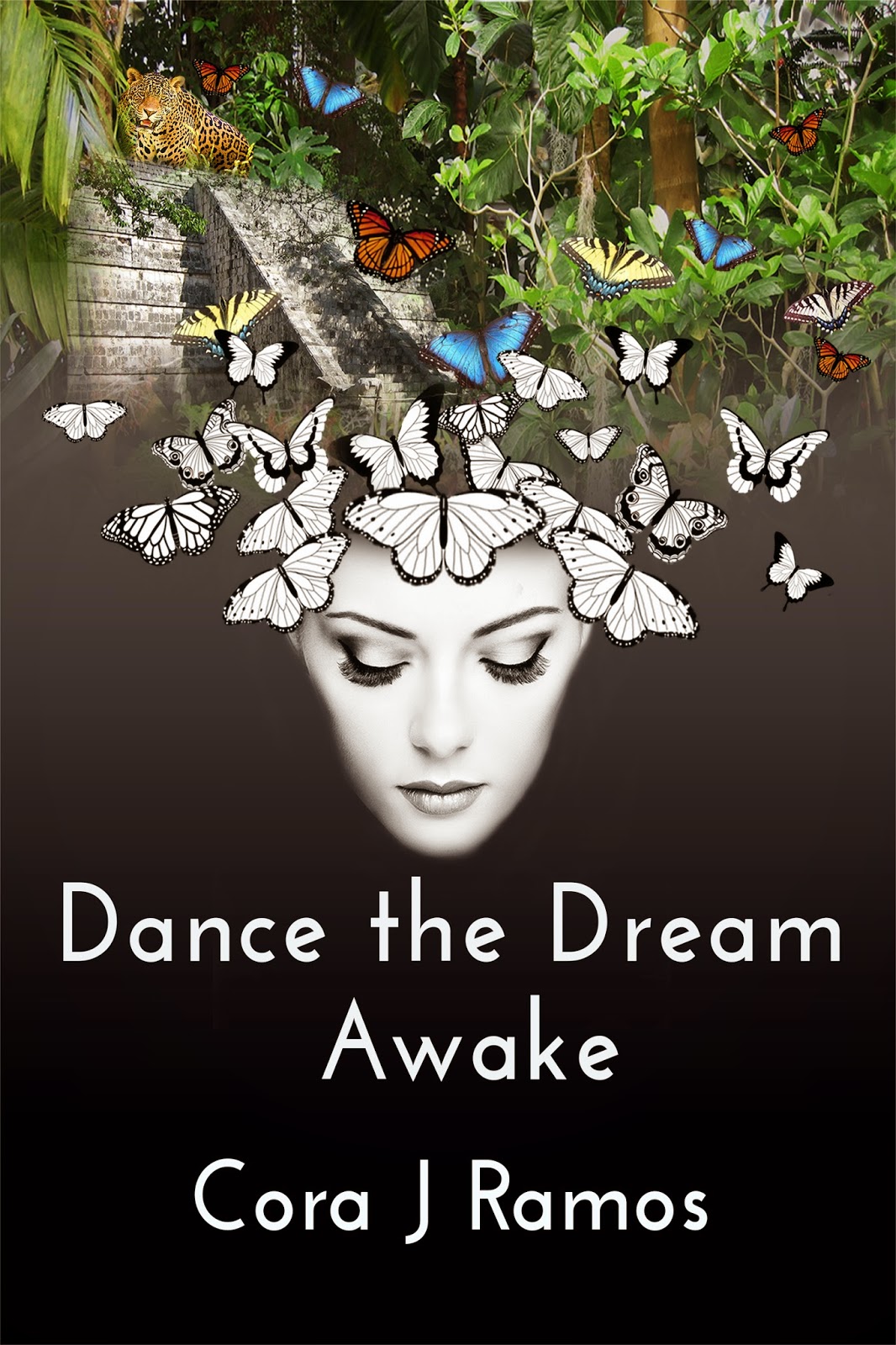 Here is an excerpt from my novel of the first déjà vu event on my trip that became part of my protagonist, Tessa’s fictionalized story:

. . . By the time we arrived, it was hot. The air-conditioning had been only slightly cooler than non-existent. My expensive outfit was damp and sticking to me in all the wrong places. My purse seemed ten pounds heavier than usual. I felt unglued. It had been years since I’d last been to Mexico. I’d forgotten how humbling and hard it was to maintain any kind of sophisticated aloofness in this humid, earthy country. I made a mental note to shop for cotton dresses. At least I had remembered to wear sandals.

I shrugged off my jacket, twisted my hair up off my neck, and tucked it under my Panama hat. After pulling my blouse out of my skirt and tying it in a knot at my waist, I felt a bit cooler. I threw my handbag over my shoulder and headed for the ruins. 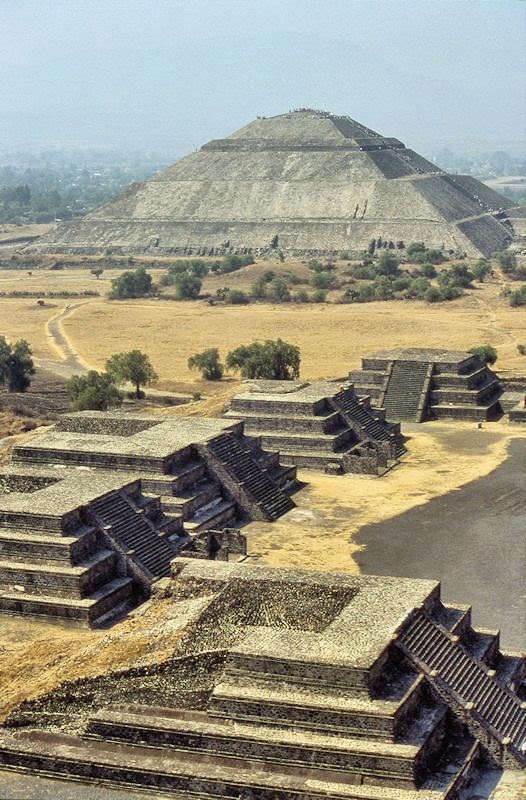 After walking to the top of the incline, I looked out over the breath-taking view of Teotihuacan. For a few moments, I saw fruit trees and bright flower gardens lining the central walkway between the great pyramids. Brightly painted houses and small temples sat on raised platforms. More modest houses sat on the edges of the fields of flowers, crops, and intertwining aqueducts.

I blinked. The mirage disappeared in the shimmering waves of heat that rose up from the ruins. Weeds and rubble were all that surrounded the pyramids now. I tried to make sense of the vivid mirage and decided I must have seen an artist’s rendering of it somewhere and remembered it in that split second.

When I noticed a group of fifty or so gaily-clothed Indians, I blinked again but they were real. They seemed to be in the process of forming a huge circle. It was too early for the tour buses so I figured it wasn’t meant for tourist entertainment and started down the hill to watch. 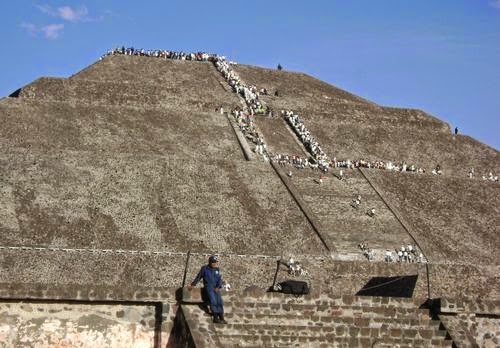 Drums beat and feathers, rattles, and beads shook in syncopated rhythms. Those in colorful native costumes danced and chanted. I moved closer, drawn by some echo of familiarity. Feelings stirred from a place deep in my heart then rose to my throat, causing tears to well up. What was happening? Why was I reacting like this? I knew nothing of these people, these ruins.

The circle of dancers stopped in unison. For a few moments no one moved, as if transfixed in time. A man stepped forward and raised a staff with feathers on it. He vigorously shook a rattle, interrupting the trance-like silence, then broke from the circle and started dancing toward the direction of the Pyramid of the Sun. The drums began a slow, steady beat as he snaked back and forth up the steps of the huge pyramid, the others following.

I had an unbearable urge to join them and moved quickly down the hill. Most had gotten halfway up by the time I reached the base. The sun was already bright and the stone reflected back the heat. Once I began the ascent, I had to stop often to catch my breath. I changed from following them, as they weaved back and forth, to heading on a straight path up the center face. When I reached the last three steps, I was exhausted and light headed. The Indians were already in a circle around the center.

Damn cigarettes. I had to break the habit this time. And I needed to start exercising more. The rising frustration at my clothes, my health, my life back home being in shambles had built to a breaking point. No one noticed my distress.

The man leading the procession stood in the center. From his strong presence and apparent authority, I assumed he was a shaman. After a few moments of silence, he raised his arms to the sky and began singing a hauntingly beautiful song in an unfamiliar language that wasn’t Spanish.

The tears welled up again. Why did I feel so much from this gathering—as if I’d come home? Mother and I had moved around so much that I never had a chance to feel that connection with a place and feel like I had a history. In the busyness of city life, I never thought about it much.

Individuals started placing little gifts on an altar in the center, while others sang quietly. The gifts were symbolic objects, wrapped in cloth and decorated with crystals, feathers, flowers, colorful ribbons, and strings. On impulse, I reached into my purse for the wooden box and removed one of the three odd, lighter green beads. What was one less that didn’t quite fit with the others anyway? I stepped forward to place it on the altar, a gift to these beautiful people and this loving moment. I felt as if a door in my heart had opened.

The shaman stopped singing when he saw it. He raised his staff, said something in the unfamiliar language, and then motioned toward me. The others ceased singing and looked up in surprise.

Suddenly embarrassed, I succumbed to the stress of the heat, humidity, and low oxygen. I watched three white butterflies float above the altar as I sank to the ground in a faint.

Release date for Dance the Dream Awake from Black Opal Books is next month, May 9, 2015, but is available for pre-order on Amazon, Smashwords and Black Opal now.

Next week: the next step on my real journey and corresponding fictionalized excerpt from the book.
*

If you would like to learn more and stay abreast of my journey and ongoing progress of my writing, join my Facebook page.

Okay, had to re-do this. Hope it comes through.

Well, seeing how it seems to have gone through - I'll say that I love the look of this blog. The words are great, too! Very informative about you and your journey that led to this book. Makes me want to read it - again! And of course, I love the cover.

Hee, hee, Kris. You were very patient with my tweaking of the cover that YOU made. LOL.