Voice and Your Inner Child

I read a post this past week by Lois Lavrisa at The writers guide to e-publishing
“Writers, beware of Chameleonizing YourVoice.”

She cautioned writers not “to change” your “true voice to fit some perceived social pressure (i.e. what’s selling.)

I’ve been pondering this for some time now—how to allow your true voice to come through—and what is it anyway? I have a clue, if not the whole enchilada. 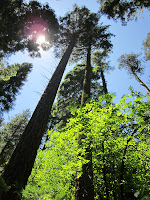 Last year, I took a stroll through . While walking through the enchanted grove of redwoods, wild flowers and minor waterfalls with its moss and magic, I couldn’t help but see with the wonder of childhood.


As I wandered the mile-long path, imagination fully active, I remembered some of the fairytales I used to read so long ago and could envision them happening in that place. I wanted to take a piece of that magic back home so I looked around until I found the rock that “spoke” to me. You rock lovers know what I mean. 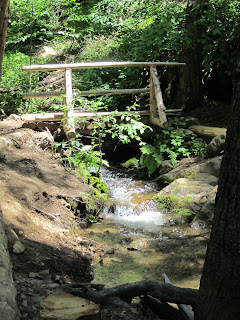 In the days that followed, I did a series of posts in my journal, entitled, “musings of the rock” as I “listened” to the wisdom that came through. I know, I know, some of you are saying, “That's just a rock! I’m outta here, this woman is looney.”

Too bad for you.

You are missing the point—looking at life with childlike simplicity, allowing the creative mind to speak to you, brings out your authentic voice. Have you so lost your inner child, your belief in all the things that tap into your creativity, that all you feel is dry and uninspired?

My advice—don’t kill the dream. Don’t become too grown up—always leave a piece of childhood alive, or if you’ve lost it, go back and find it.

What is this state of childhood I am talking about that’s so special and what does it have to do with voice? It is the ability to believe in the impossible and pretend with abandon, to try new things or old things in new ways.

Not all children have the option to be childlike when that innocence is stolen or ground out of them by the insensitivity of others around them while growing up. As soon as the ‘adult’ voice comes in with, “That’s silly, immature, naïve,” or is dismissive and critical with, “You're too adult for that,” then that sensitive child within withers and, eventually, will die if it is not revived and nurtured.

I’m convinced that H.G. Wells, and Jules Verne had their inner childhood intact. That was why they were able to make the leaps they did.

Einstein said, “Logic will take you from A to B. Imagination will take you everywhere”
and
“I am enough of an artist to draw freely upon my imagination,”
and
“Imagination is everything. It is the preview of life’s coming attractions.”

I think you have to believe in yourself, love yourself and allow the child-like wonder stay alive. When you are not afraid to bring out your inner child, or at least allow it to come out and play a bit, you may just get closer to bringing out your writer-blogger voice.

When we write our novels we have much less of a filter due to the distance from creation to publishing when we have time to edit, but we are much more critical when it is going out into cyberspace on the next click. I'm not talking about inappropriate content as Kristen Lamb warns in her article, Deadly Doses-Politics, Religion and Our Author Platform. I am talking about being yourself fully, and as Isaiah said, "a little child will  lead them.

What about you—do you think I’m crazy?
Or do you think I might be on to something?
Or, here’s a safe question, do you collect rocks?

I LOVE rocks. So many cool ones and like you, I see stories and memories through them.

I alos think you are on to something. My kids think I'm part crazy, but allowing a piece of the fun of childhood to linger doesn't make one immature -- we're not talking about the responsibilities of adulthood. It's about seeing life through a different perspective. I prefer it.

Yes, I collect rocks when I feel a special draw to a moment or place. I have one I treasure from the Yucatan--it was a piece of coral washed up on shore. Thanks for your supportive comment.

I totally agree that we have to retain at least a piece of our natural childlike wonder. I am lucky that I get a daily reminder of what it looks like in action with my youngest daughter. Playing is her number one priority every day and she will tell you as much. Imaginative, pretend play is her favorite thing. I love witnessing it and being a part of it. Thanks for reminding all of us to bring that into our writing voices.

I went to a class a friend put on and she had us draw a picture we would have drawn when we were six or seven. I knew I had to draw rainbows, unicorns, or hearts. The exercise was to get you back to that time and remember what it felt like to be able to do anything.

Yes, watching small children pretend play can help us get in touch with that openness we can lose as we get older and more jaded.

Sounds like a good exercise. I recently got that feeling through a pottery class. I always wanted to take one and finally did. Playing in the mud/clay was very freeing-and the free-spirited teacher didn't hurt either.

I think finding the balance between the words of my heart and what the rest of the world wants to read is one of the most difficult parts of this game. I don't collect rocks, but my goofy dog Burnsie reminds me on a daily basis what unbridled enthusiasm and love look like.

You bring up a good point, Liv. It's quite a challenge to know your audience and what they want and still write from your heart when it doesn't fit. I'm leaning toward half and half. Don't know if I can achieve that balance, but I'm working at it.
Aren't dogs wonderful?

This is a great post, Cora! It's nice to be reminded that as writers, we have permission to stay childlike--to hush up the inner (and outer) critics sometimes--to remember what we loved about writing in the first place. Thanks!