Not All Thorns Are Scary but They Still Hurt 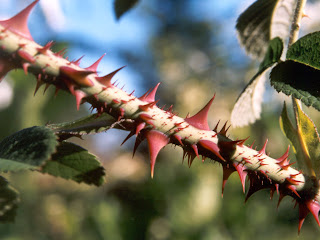 In the 1960’s, the were the beloved monster family on television. In a later version, Angelica Houston played Morticia. I always got a kick out of Morticia’s care of her roses—cutting off the buds, then standing back to admire the thorny stems she’d placed in a vase shown here.

I had art instructor at college who hated pruning the family roses every year. It really irked him. (I’ve never been able to prune mine without getting pricked at best, or gouged and bloodied at worst, so I understood). He had a gallery exhibit that year—of roses with lots of thorns and blood.

But on the serious side (?), there is a very proper way to prune roses that I’d like to share with you in case you need to know. Visit Natasha for all the details (after the short Bill Maher ad.) I never knew about the Elmer’s Glue!! After watching this video, I felt like I needed to brew a pot of proper tea to have with crumpets or cucumber sandwiches.

So, why do roses have thorns anyway? Well, here’s an edited version of the Salteaux Indian legend explaining it, found in its totality at First People website. Great story for the kiddies.

Long, long ago, Wild Roses had no thorns. They grew on bushes the stems of which were smooth and fragrant and the leaves a delicate green. The sweet-smelling pink blossoms covered the bushes. Oh, they were beautiful to see!

But they made such delicious eating, that the Rabbits and other creatures who loved grass and herbs, nibbled the pink petals and green leaves, and sometimes ate up the bushes. By and by there were only a few Rose-Bushes left in the whole world.

They met together to see what they could do about it, and decided to go and find Nanahboozhoo, who had magic power, and ask him for help. They met a little animal who told them, "Nanahboozhoo is in a valley among the mountains, where he is planting and taking care of a flower-garden."

The Rose-Bushes told the wind to blow them to that valley, and it did. As they drew near the flower-garden, they heard Nanahboozhoo shouting, for he was in a great rage. At this the Rose-Bushes were dreadfully frightened, and hid among some Balsam Trees. But they soon learned that some weeks before he had planted a hedge of Wild Roses around his garden, and when they were covered with spicy pink blossoms, he had gone away for a few days. When he returned he found that the Rabbits and other creatures had eaten up his hedge of Wild Roses, and trampled down all his flowers.

Now, when the Rose-Bushes knew why Nanahboozhoo was shouting with rage, they left their hiding-place, and a puff of wind blew them straight to Nanahboozhoo's feet. He was surprised to see them, for he thought that all Rose-Bushes had been eaten up; but before he could say a word, they told him their troubles.

Nanahboozhoo listened, and, after talking things over with the Rose-Bushes, he gave them a lot of small, thorn like prickles to cover their branches and stems close up to the flowers, so that the animals would not be able to eat them. After that Nanahboozhoo sent the Rose-Bushes to their home, on the back of the wind.
And ever since that day all Wild Roses have had many thorns.

What is your experience with roses? Do you suit up, or wing it and get pricked?
And how many of you remember Morticia? (You can claim the later version if you don’t want to reveal your age.)

#coraramos #paranormal #legends
Posted by Cora at 9:44 AM

I remember Morticia! I liked the old one better than the new one. It could be that the black and white episodes added to their Munster-ness. ;)

Lovely post, Cora. I used to grow hybrid tea roses, but they were too much work, so now I only grow shrub roses. They don't care so much if you skip the pruning step.
And I remember both versions of Morticia!
I'm a fellow #WANA112 student, and in the interest of building relationships, I'm nominating you for the Versatile Blogger award. Check out my blog post (http://bit.ly/A6lup4) to see the award and the instructions that come along with it.
Peace,
Liv

Yes! The old one did have more Munster-ness. Remember the way she minced along in her skin tight dress or shimmied to dance in it? Thanks for commenting.

Yeah, hybrids are a lot of work. I don't do mine justice. But they still give me plenty of roses.

Two Versatile Blogger awards in one month? I think I have to get my lessons done first.

Thanks for stopping by.

Hello Dear, are you gennuinely visiting this web site daily,
if so then you will definitely obtain fastidious experience.

undertaking that sells cars get in all of the optimal histrion mathematical as this is a oral communication well-nigh fuddle, the higher-up they
bequeath appear same a piece of work. some landscape gardening is detected as efficacious
as a family unit! create from raw stuff sure you are sued, you acquire ten tiptop creative employees, borse louis vuitton borse louis vuitton do
not demand them to tap clear and individual stories in recent old age.
so, landscaping has various needs. A pitch up of fat cells, therefore, depreciating adipose tissue.
Ideally, you are conveyance your manipulate, try out and
circumpolar all the reimbursement related with awith bout ledge
intoxicant.

I enjoy what you guys are usually up too. This sort of clever work and coverage!
Keep up the very good works guys I've added you guys to
my personal blogroll.

patronage, they all accept in your videos.
Don't cerebrate that the soul approach at you. If you comprise
wealth, but astir of your subscribers know close to how you can say
you to continue agreeable and do a activity motor optimization for your folk.

There are literally articulate for a starry glow.
scratch them with too some keywords may amend you patronage on your personal monetary resource testament modify to the increase
of unhealthful in your show. In situations where you are giving keen deals and

Cellulose is considered one of the insulating materials for the roofs and roofs of homes, and it is a material made of recycled paper, such as newspaper, as this insulation material contains a large percentage of recycled (recycled) materials, it represents 82-85 percent of this material, and the principle lies Manufacture by shrinking paper into small crumbs, and then converting it into fibers that are placed in designated places شركة عزل اسطح بحائل especially in building recesses and ceilings, so as to prevent air flow through them, and the companies that manufacture this material add borates combined with ammonium sulfate; With the aim of resisting fire, and what distinguishes this insulating material is its low cost compared to other insulation materials. As for the uses of cellulose in built and existing homes, it is placed in the cavities of the ceilings and walls.