Why did I write about the Maya and Mesoamerica (in Dancethe Dream Awake*)? Because I find the culture a constant fascination. New archaeological discoveries are made all the time, amazing me again and again. Like the river of mercury (I just learned) that was discovered in 2015 under the temple of the Feathered Serpent.

Deep under Quetzalcoatl’s Temple at Teotihuacan, outside Mexico City, they found large quantities of liquid mercury (which held no practical purpose for ancient Mesoamericans) and is speculated may have symbolized an underworld river or lake (the underworld held great significance for them). It is believed to be a burial chamber. 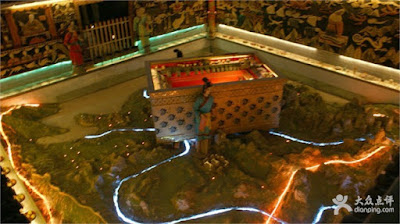 Why is this so fascinating? Because in the tomb (yet to be revealed to the public) of China’s 1st Emperor, Qin Shi Huang, there is a moat or river of liquid mercury that has been undisturbed under his tomb for more than two millennia. Nobody in the world right now has the technology to properly excavate it without danger to the items inside, so China will not open it. It will remain a mystery for a long time to come.

If that were all, I probably would have thought, 'huh, very interesting coincidence,' and moved on. But when you start to put together all the other coincidences, it gets weirder and weirder to be just a coincidence. 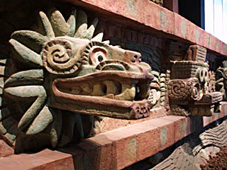 The symbol of a snake is used world-wide in many cultures. But one from the sky? The feathered serpent was a symbol for the supreme god of the Maya (called Kukulcan) and for the Teotihuacanos and Aztecs (called Quetzalcoatl).

In China, the winged dragon was worshipped as a supernatural power of the air, and became the symbol of the imperial authority of the emperor.

Feathered serpents AND rivers of mercury? When I put together these very unlikely findings from Teotihuacan and China I’m flabbergasted. I’ll leave you to draw your own conclusions.

I'd love to know what you think.

you like stories with mystical happenings, magical stones, shamans, caves and ancient spirits, and a love story that extends from a past into present day like my novel Dance the Dream Awake,

check out my writer friend, Krista Lynn’s new novel just released, BloodStones, The Haunting of Sunset Canyon, which takes place in the Arizona desert. Our writing styles are different, but we’re both inspired by ancient cultures and the possibilities they hold.

Found myself thinking almost exacty the same thing. It gets even better when you google "Shimao carvings"; Shimao being the most ancient of Chinese cities. The symbolism is almost identical to the one found in Meso-american carvings. If you look up when Asian people crossed over to the Americas via the Bering Strait passage according to science, there is a much wider gap between the last contact between Asian and Meso-american peoples than this apparent cultural link suggests. Or this kind of symbolism was already embedded in the culture of the peoples crossing the strait some 12.000 years ago or it is pure coinicidence or there was cultural exchange between China and the Americas a handful of millenia after the first people crossed. I think all of these possibilities are fascinating. I can't imagine any knowledge of mercury 12.000 years ago. I find it hard to believe all this to be coincidence, but also the contact hypothesis is quite unbelievable. Interesting times! Let's see what else we can uncover...