What is the Green Thing?

During the holiday this question came up when I put a photo on Facebook to signal to family members that the green thing was being made and would soon be available. 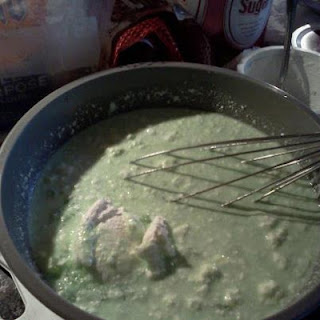 I must give you some background before I can tell you what the green thing is. Early on in my marriage we had holiday gatherings at my sister-in-law’s house. She is the ultimate earth mother figure in the family. She does it all. She always cooks everything so if we bring something, it needs to be something she wouldn't have already prepared.


It was not intentional that I would end up bringing the green thing, it just worked out that a Jello mold was what I chose since no one else ever brought one. Initially, I wanted to make a mold that would go with dinner, not necessarily be a dessert (but everyone decides when they want to eat it-with or after dinner). So I remembered a green mold that someone had made at a church event years earlier that I loved. I didn’t have a recipe but figured I would try to work out the ingredients and see what I could come up with.


“What is it called?” someone asked when I first showed up with it.


So was born The Green Thing.


Since I never had a standard, written recipe to follow, it’s never exactly the same. The ingredients have varied through the years—sometimes better than at other times.


One year I was sure would be the last time I'd make it was when I was rushed and made it late. I planned to unmold it just before dinner at my sister-in-laws. It didn’t gel and I announced that it was ruined, but no one was deterred. They took a little cupful and ate it with a soup spoon. I thought they were being polite.


As a result, I didn’t make it the next year and was chastised soundly. We laughed about it being good whether or not it gelled and I’d better keep making it. It turned out to be one of the more memorable years and the subject of much joking and laughter ever since—especially when someone new asks, “What’s the Green Thing?”


One year I grew bored making the same jello dish and so brought a red “thing” for 4th of July, with fresh, in-season strawberries—great fit for the holiday, right? And I think I tried mandarin oranges for an orange thing another time. But always the question, “Where’s the green thing?” came up. After a while it was no longer simply looked for and asked about, it was demanded, ‘You will bring the green thing. If you bring anything else that’s okay, but you must bring the green thing.’ It has been loved, criticized, eaten and drunk, but always demanded.


So was born a tradition, The Green Thing (only a general recipe follows-so if you try it you will have to experiment to find the taste and texture that suits you and yours):


Follow the recipe for a mold, which includes a less water so it will unmold well (especially since there is juice in the pineapple). If you would rather not do a mold, you can let it gel in a serving bowl so everyone can scoop out a portion size they want (probably a good idea the first time in case it doesn't gel).


You have to let the gelatin thicken a little before adding the other ingredients or the ingredients will all float to the top during the gelling process.


To the slightly gelled mixture,
Add:
1 large can of Dole crushed pineapple (I use the one with pineapple in its own juice)
Chopped cucumber (I like pickling cukes and you can use 1 or 2)
Chopped celery (1 or 2 stalks)
1 pkg cream cheese (I use the whipped cream cheese because it breaks down easier)


Pecans, chopped (amount to suit you—you can use walnuts but some people are allergic to walnuts.)

Be sure to make the Jello as indicated on the box for a mold (less water). When it has thickened, but not yet set, add the cream cheese (beat it to smooth or keep a little chunky to your preference). Then add the rest of the ingredients to taste and pour it into mold or a serving bowl to jell in frig. 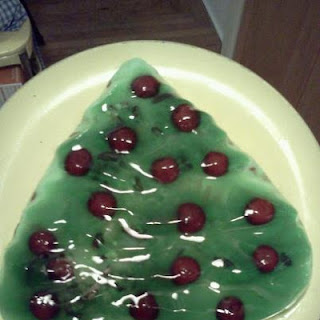 I used a Christmas tree mold this year and so added in just enough prepared gelatin (without anything else added yet) to the bottom of the mold so it would hold the added maraschino cherries (the balls on the tree) to set in the frig while I mixed the rest of the ingredients. By then the Jello and cherries were firm enough so I could pour in the rest of the ingredients without them bleeding through.


Mystery solved. So now you know and can make the Green Thing if you dare, just in time for New Year’s. If you do, let me know how it goes.

Do you have a family tradition that has grown through the years? Was it planned or did it grow organically?

I initially thought the 'green thing' in the saucepan was chile verde, lol.
Christmas holidays bring out the traditional tamale fest at our house and the making of Champurrado, a Mexican hot beverage.
Tamales have been made every year, without fail, since my mom was twenty. She's 85 now. Champurrado is a recent addition that started when she became too old to continue making atole (another Mexican drink). Since I'm a chocolate lover, I began making the champurrado. I have a recipe on my blog for anyone interested. And I love the Christmas Tree jello mold-keeping that in mind for next year.

LOL I looove the Green Thing story. I'm not very adventurous and always needs a recipe, so my hat is off to you.
Marja McGraw

That's awesome! Every year at Christmas my mom makes bread. It's a cinnamon raisin loaf that we call Aunt Lynne's Bread, named after Mom's college roommate who first gave her the recipe. She makes upwards of 30 loaves to give out at her annual Christmas party. Sitting down to a couple slices of toasted Aunt Lynne's Bread and a cup of coffee is how I know it's really Christmas morning.
;)

Oh, yeah, we had the tamale fest, the Champurrado & atole. The green thing goes nicely with them.

Thanks, Marja. The recipe is on the box (well except for all the other stuff that makes it the green thing). Ha.

The Green Thing is good, that's why it has been maintained for all our Christmas gatherings.

Mmm, sounds yummy. Your Mom is very dedicated to make that many loaves. Cinnamon raisin is soooo good toasted, the smell alone gets to you....

I would like to request you develop a red thing. I prefer those flavors to lime. Then, of course, you also need to share The Red Thing with me!

I love that story, Cora. Family traditions are amazing things.

Cora, I like your style. Would you take guest blogs from another practical mystery writer? The cover of Coming Flu was green.
JL Greger
Coming Flu and (in March) Murder: A New Way to Lose Weight

With your comment in mind, I found a yellow thing and fixed it for New Year's and got good comments--even, "I think this is going to give the green thing a run for its money." So here's where you can find the Creamy Lemon Dessert with Grapes: (You will have to copy and paste)
http://www.kraftrecipes.com/recipes/creamy-lemon-dessert-fresh-111325.aspx

They are, aren't they. They are the stuff of laughter and joking and feeling good all over.

I sent you a message on Facebook. Sounds good to me.