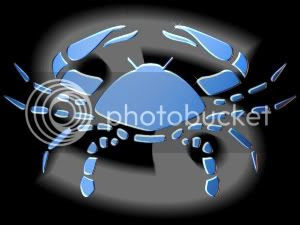 Ongoing series of building characters with the use of archetypes drawn from astrological signs, the Tarot and myths.

Cancer is a water sign and the crab (with its hard shell and soft interior) is the symbol most often attributed to it; smooth and confident outside and deeply emotional inside. It is characterized by the phrase, still waters run deep. Cancerians are emotional and sensitive, given to deep thoughts and conversations.

The crab carries his world on his back, and home is of great importance to Cancer. Most agree that Cancer is fundamentally conservative and home-loving. With their strong maternal and paternal instincts, Cancerians tend to like and have larger families. They are never far from hearth and home.

The other symbol, assigned to Cancer by the Egyptians, is the sacred scarab. During mummification, a carving of the sacred scarab was placed where the heart had been. Cancer is one of the signs that resonates love in the zodiac, an indication of its sociable and caring nature.

That is the crawling low part. Now for the flying high aspect.

The Tarot card associated with the sign of Cancer is The Chariot Card, an ancient symbol linked to numerous myths.

Socrates likened the chariot to the human soul “the natural union of a team of winged horses (one black and one white-depicting this split within the human personality) and their charioteer.” The charioteer drives the two horses, with their conflicting natures through life. (The Rider-Waite Tarot deck shows two sphinxes instead of horses.)

Cancer is ruled by or linked to the Moon (and the Moon is associated with the High Priestess of the Tarot-representing balance).

This Greek myth pulls all these symbols together to help us understand where the elements of the Chariot card evolved from: 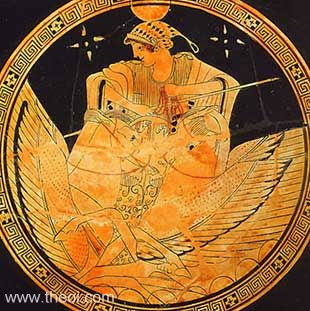 "After bathing in the ocean, Selene, the original Titan Moon Goddess carried the moon across the heavens in a silver chariot pulled by white horses. Eos the Dawn, Selene’s sister, then pulled back the curtain of night so that her brother Helios was allowed to drive his golden chariot across the sky carrying the sun. Selene and Helios were eternally entwined in their chase of light and dark." (From Auntie Moon)

The Chariot of the Tarot exemplifies the struggle of Cancer, to maintain balance in the midst of changes and competing desires. Steering to the middle of the road is the goal of Cancer (The Charioteer) in the midst of struggling with opposing thoughts and feelings. They must learn to control their instincts and passions and harness their energy so it can be directed in positive ways.

Cancers are usually imaginative and intuitive and have an ability to identify with other people’s situations. Because of their imaginative side, they may possess considerable literary, artistic or oratorical talent. They could be good on stage, but are in danger of overacting because of their emotional side. They are usually not trailblazers because they build off of existing ideas, rather than creating new ones.

Even thought they appear down-to-earth, they may be fascinated by the mystical or psychic, more than the average.

They can be inspiring (especially to youth) if they can reconcile the conflict of their urge to be outgoing with the reserve that causes them to withdraw into themselves.

Potential faults: they can be untidy, sulky, devious, moody and inclining to self-pity because of an inferiority complex. Or, they can brood on insults (real or imagined). They can be easily flattered and when prone to fantasy, they may try to shape their lives to fit some romantic ideal.

They avoid risk and take time to consider all possibilities and outcomes before moving forward.

Mix and match from some of their positive and negative juicy characteristics to make interesting characters for your stories:

I'm excited you did my sign today! You pretty much captured who I am, though I don't think I'm untidy, sulking, or devious in terms of faults. Maybe friends/family would say otherwise, but I've never been told that.

Someone once described me as being like a duck - appearing smooth and calm as it glides across the water, but swimming like crazy underneath the surface. I've always thought that fit for myself. I was reminded of it by the phrase "still waters run deep".

Thanks for sharing this!

Glad you stopped by. I think the reason you can't relate to being untidy, sulking or devious is because you are operating out of your positive self. (Save those faults for when you build your dubious Cancer character)

I love the way you related tarot to astrology, and it is true that there are tarot cards that are closely associated with certain zodiac signs. This is a great read for psychics who want to use as many tools as possible in any given session.

There are sometimes more than one tarot card associated with a sign but I try to keep it simple and within the parameters of one post. For a psychic, it can at least be a place to start from. Thanks for stopping by and for your comment.

This is a well thought out article.I like what you have to say about Cancer and the Egyptians.

I like to talk to a phone psychic, who also does tarot readings as well!