The only way I can ­explain reveal my voice, other than in my writing, is to say that I’m a tried and true Libra. When in balance, everything hums along; writing flows, butterflies grace my yard, the clouds part to reveal the sun and I even hear angels singing (oh, sorry, that was the stereo next door).

When I’m out of balance—well I won’t go there. Just know, everything is the opposite of in-balance. So, when I try to write in the latter state, it usually goes like this:
I dfon’t don’t know anyghitn anything gor for sure. Damn, spilled my coffee on my note book. But I may have moments of clairyt clarity once in a while. . .

If you are a Libra, you will understand. Everybody else, you have your own problems when not in primo form. I partially understand the Pisces’ fish and the Taurus bull (family members) signs, but how does anybody really know all the forces at work to create our bad and good days and temperaments?

When I struggle to find the words to explain the mysterious ways in which we perform to perfection or drag to distraction, I keep flopping around like a fish out of water trying, until those forces align and my writing hums. Some days it just doesn’t come up to the standard I would want, but I still have to have a post so I do what I must.

Organization helps. But when it comes to pencil to paper or finger tips to keyboard, if it’s not upstairs flowing like honey, it comes out all sticky and slow. My contradictions and conundrums show but I keep on typing for that moment of clarity.

The idea for this blog post was a moment of insight, just briefly as I lay in bed this morning wondering what the he!!? I was going to write about. I’m already one day late for my Monday post and the pressure only makes it worse. So, here’s what you get, perfectly suited to my new log line: drinking from the eclectic cool-aid (with a “c”on purpose-think about it).

Archetypes, Astrology and the Tarot

I love this subject. It’s at the heart of characterization. Understand the archetypes like Joseph Campbell described http://bit.ly/qRNlfz  and you are well on your way to developing your characters. But all characters are a mix of real psychological types, scrambled with contradictions. So I decided to bring up some thoughts about how they might work.

Let’s start with the astrological sign of Libra which I know so well as moi (I never took French so forgive me if I slaughtered correct usage here—it just sounded so perfect—thank you Miss Piggy).

Libra is the sign of balance, shown with the scales of justice (always weighing things back and forth like a see-saw, often in turmoil deciding if it’s this or that, right or wrong, correct or incorrect, spending an inordinate amount of time making a decision—before eventually achieving the middle ground). 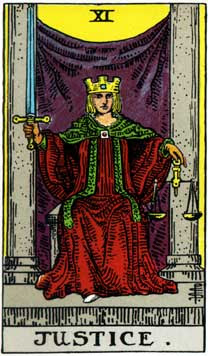 Libra, with its scales of justice, is the ruling sign of the Tarot card, Justice.

Our courthouses have Justice blindfolded with the scales—so she won’t be swayed by emotion which would throw her out of wack (you don’t know the half of it).

Libra also refers to the Greek word for yoke. . . The astrological glyph for Libra resembles both a balance and a yoke. Criminals are yoked by the balanced application of the law, and spouses are bound or yoked together by matrimony. Mythological images of scales, yokes and swords (another symbol of justice and a suit of the tarot) have early roots in Western myth and culture.”
http://bit.ly/wRkrQ3

But, some say The Empress is the card for the Libra, being that Venus is the symbol of female fecundity and fertility and the planet that rules Libra. 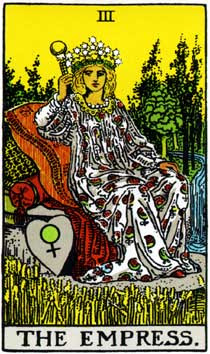 She influences love and the emotions (which can be very pleasant and loving or play havoc with how you perceive people or circumstances, as well as the state of your own emotional mindset.) Like Venus, the Empress also means justice or adjustment.

“The main symbol for this card is a balance or scale used for measuring weight. The scale is held by a goddess who holds an upright sword. The symbolism represents the law of cause and effect; those natural forces which seek a balance or moderation in all things. The figure shown in the Thoth deck is the feminine complement of the Fool, a young and slender woman. She is poised on her toes and crowned with the feathers of Maat, the goddess of justice. On her forehead is the Uraeus serpent. She is masked (Harlequin) and holds a magic Swords in both hands between her thighs. She is wrapped in a Cloak of Mystery. Before her is a large two-pan balance. This card represents the conscience. The imagery suggests the archetypes of justice, fairness, and balance.”
Chaos and the Psychological Symbolism of the Tarot
by Gerald Schueler, Ph.D. © 1997

But, the best explanation: is that when Venus is in the sign of Libra, “from a Tarot perspective, would be likened to the Empress is wearing the clothes of Justice. She’s gotten tough and taken up the sword. She
“is about creation and abundance. She encourages play and wants to shower the whole world in joy. She’s a hands-on type mother, and maybe a little indulgent, but she knows the world can be tough. If she can provide her children with protection from what’s ugly and cold, she’ll do it.And she’ll do it with style.
The Empress is beauty in all its manifestations, and love fills everything she touches. Justice, on the other hand is a little more hard-core. It’s not that she doesn’t love, but she’s more concerned that things are fair or right.
She insists on balance, clarity and respect for authority. Not the authority of the dictator, but the authority of a more universal law. Rules are guides to ‘right living’, and can be very useful. But Justice is more than just rules. She’s the guardian of nature’s interplay.”  http://bit.ly/wbJYSr

So there you have multiple, and complex ideas, on how to write a Libra character. A few of our local writers here in town are astrologers and go about building their characters through knowledge of astrology.

Have you ever used the Tarot or astrology to help you build one or more or your characters?

Do you take much time researching psychological types for your characters? (Carl Jung, Joseph Campbell)

Do you recognize this character in movies or TV? (can be male or female)

If I continue this column (depending on positive responses), which sign would you like me to talk about? If yes, then I have to ask, what’s your sign?

Interesting. I never thought to develop a character based on astrological signs! Hmmm...

I am a Taurus. Don't really know much abt the sign other than it's a bull and they are known to be stubborn. I am ;)

You've given me something to think about ~ Thanks, Cora!

Thanks for stopping by Kim. Briefly, Venus also influences Taurus and is concerned with love and personal relationships, as well as arts and fashion. It encourages generosity and tactfulness but it can also be possessive. It can cause a person under stress to be indecisive and co-dependent on another. My daughter is a Taurus--very focused and determined, loves the arts and people. Stay tuned. . .

I've used oodles of ways to develop characters, probably coz I'm a die-hard plotter. Haven't used astrology but, thanks to Holly Lisle, I've used the Tarot for inspiration and mid-manuscript imagination-jogging.

My two fave books for straight character development are 'Heroes and Heroines' and '45 Master Characters'. Probably the best method, though, is in Lajos Egri's 'The Art of Dramatic Writing'. It's my go-to/ground-zero book for any and all things writing.

As for researching via Jung, etc., you'd think coz I did my undergrad and grad in Psychology that avenue would be a first choice. Not. Hugely unsuccessful. I have better luck doing the Lajos Egri thing to get a good, basic picture and then spending 'mental time' with him/her. Strange, but it works for me.

Oh, and I'm a Pisces with seven or so houses in Pisces. My mom is a true Libra. We're, um, very different from one another.

I have never used astrology or tarot to think about characters but I tend to write and later try to figure out what the heck everyone is all about. I love Joseph Campbell though and think he influences me even though I haven't read him in years. I'm a Pisces and everyone says I'm the original Pisces so I guess I wonder what that means. I'd love if you did one of these posts on Pisces. Enjoyed this.

Pices huh? My mom was Pisces--didn't work for me either. Maybe we both have some major stuff to learn from that. Ya think? Well it must be true for me at least because I married a Pisces as well. I will do a post on Pisces soon.

I'm not an expert in astrology, just been interested in it for many years. An original Pisces? Don't know what that means but it might be because you have a lot of planets in Pisces. I will do Pisces post.