Psychic.  Occult.  Possessed.  Sacrifice.  Voodoo.
What associations, visions and emotions do these words evoke in you?

Different sets of words both with sacrifice. Associations you already hold in your mind play a big part of your perceptions. Words have power because of what the reader brings. Since I consider metaphysical subjects quite often, I thought I’d give you some food for thought.

I have been intrigued by native medicine and healing practices for a long time. I have researched and ordered rain forest herbs for specific ailments, carefully tried to get all the vitamins and herbs (notice plural-you should see my kitchen cabinet) that I need for my body, and have gone to healers (non-doctors) at certain times in my life when traditional medicine failed me. I was also part of a healing group that worked with the etheric body (subject for a later post). Part of my journey has been like a research project on myself. Always open to alternate methods of healing, I still hold a scientific reticence that it could be a con, or just the suggestion of the mind--words again, and the associations we hold. Nevertheless, I have seen some amazing things and try to remain open minded.

Many years ago, my husband and I went to Mexico and were told of this elderly professor that collected yarn painting by the Huichol Indians and that she might have some of her collection she would be willing to part with, but she needed to talk to us first (check us out?). After talking to us for quite a while, she brought out some of her yarn paintings. 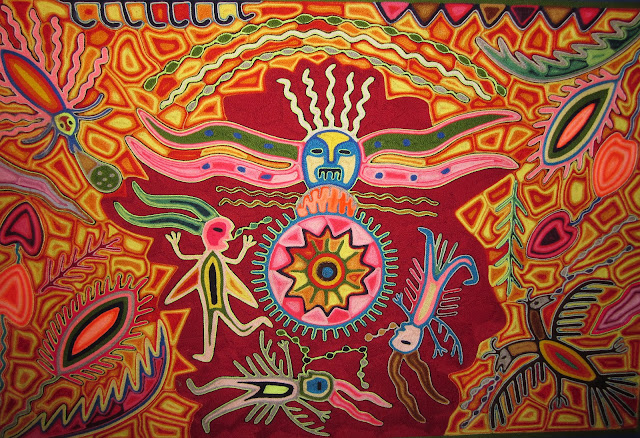 You may have heard of these yarn paintings and for those who have not, let me give you a short explanation.
The Huichol Indians (like national treasures) are revered in . http://bit.ly/xAhnam . Their sacrament is the peyote—yeah, that one—which they gather while on a spiritual trek into the desert. They eat the peyote to bring on visions that draw them closer to their spiritual center. They glean inspiration on their journey that they then share in paintings and statues (made of yarn or beads) and through embroidery.

So, this lady sold us two of her yarn paintings and a statue made of beads pressed into bee's wax. At that time in the seventies they were inexpensive (now you often see them in museums) and we were thrilled because I really loved the whole idea of these people; descendants of the Aztecs who the Spanish could not conquer, who had kept their culture intact and had become recognized as a national treasure because of their integrity and beauty of spirit.

It wasn’t until several months later while staring at one of the yarn paintings hanging on the wall, in a moment of complete relaxation--sort of meditation where no words were running through my mind, that this head popped out like a psychedelic blip. In the swirl of red and orange designs was the head of a mara’kame in the negative space that I hadn’t seen before and didn’t know was there.  A mara’kame (mar-uh-ka-may) is a Mexican healer or shaman.

(For more on mara’kame, shamans and use of peyote: http://bit.ly/zz78Rk Personal reminiscences of 's Huichol people III: the shaman by Ronald A. Barnett )

When I got past the surprise and excitement of the moment, I gleaned deep insight into what the Huichol artist had seen and experienced and was able to bring out in his art. I understood the wonder of his peyote experience, the power of the mara’kame as shaman, the power of color and art in healing and teaching by getting beyond words. I felt it all at once in that moment of stark clarity when I wasn’t holding any resistance or mental blocks.

For those with pain or illness, check out this blog:

Are you open to what lies just over the edge, beyond words?

Have you had any metaphysical experiences?

Wow, what a post. I wish I could comment with something worth while, but today is a strange day. I did know about yarn paintings, and I've been fascinated with Native American culture, though I haven't researched it as much as I perhaps should. Your words are beautiful, though. It is amazing what we can feel when we let go of those stubborn mental blocks, isn't it?

Medicine healers, whether they are called curanderas or mara'kame's is something that I have encountered during my younger life. In Mexican and Mexican American neighborhoods here in the U.S, the healer was the curandera that the family called when someone was ill instead of going to the doctor. This wasn't for serious illnesses but for fevers, stomach aches, muscle pains, and such. The curandera used herbs, teas, ointments, and oils.
When my mom was able to afford medical insurance we still used herbs and teas for less serious ills as well as the use of a sobador (like a masseuse) for muscle strains.
I love Huichol arts and crafts and you're fortunate to have bought some back in the '70's since the prices are exorbitant now.

In my husbands experience, curanderas often have psychic abilities as well as healing abilities. I was so inspired by these native healers that I feature curanderas in my novel to come out at the end of the year. It's nice to hear from someone with direct experience. Thanks for your comments.