When you don't cover up the world with words and labels,
a sense of the miraculous returns to your life
that was lost a long time ago
when humanity,
instead of using thought,
became possessed by thought.
Eckhart Tolle 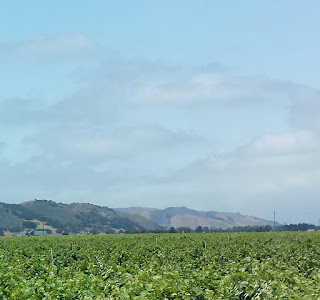 I traveled to an event this past weekend with the Central Coast Chapter of Sisters in Crime to sell books at the Zaca Mesa Winery on the California coast near Santa Barbara. A fellow writer friend, Krista Lynn, whose book was in the process of being published at the time, agreed to go with me. 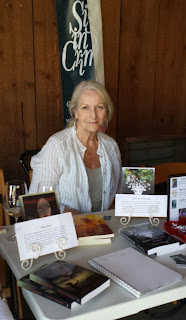 On the drive, we were discussing what we can realistically expect to accomplish with one or two books, acknowledging to each other that we just have to stay focused on the writing and not be over-much taken up with the promotion side of the business.


At that moment, a coyote trotted across the highway in front of the car. He looked straight at us before moving on, basically confirming what we were just talking about.

I try always to be open to nature when it speaks. In animal totem meaning, the coyote is the trickster, full of fun and playfulness, teaching through paradox and revealing the truth behind illusion and chaos. He was affirming our conclusion to not take things too seriously and keep more balance between wisdom and playfulness on our writer journey and we paid attention. I’m very grateful to have a friend that also believes nature speaks to us.

“The wisdom delivered by the coyote spirit animal is rarely direct. The way of the coyote is to teach through ways that do not appear straightforward. It may also use subterfuge or trickery to reach its goal or deliver its message.”  (Spirit animals and animal totems )

The funny thing about this trip was that everything seemed to be out of sync from that moment on. Kris kept commenting how it seemed like we were wavering between two dimensions where things were reversed or out of order.

The perfect example was when we got to the hotel where we were staying which I'd never been to before. We walked into the lobby—on the 4th floor, the rest of the hotel being below that going down to the 3rd, 2nd and 1st floors in that order. Then when we got to our room and opened the door, there were already people in it. How often does that happen? And breakfast was on the 3rd floor. I could never remember which to press for the elevator--up or down.

So why am I talking about this? Coyote teaches that reality is not always what it seems, or what we take it to be; he offers hidden wisdom with a sense of humor. His appearance only confirmed—that things do not always come in the order that would seem logical, and that the ‘magic’ exists in wondrous ways if we only keep our mind open to all possibilities.

Some would say we are simply twisting what occurs to formulate a magical conclusion, but I would counter that life exists on many levels we can’t see or acknowledge unless our minds stay open.

The closed mind cannot see outside its self-imposed parameters. (a coraism)

“Your assumptions are your windows on the world. Scrub them off every once in a while, or the light won't come in.” ― Isaac Asimov

Did you know that the color blue was not seen until more recent times? We somehow did not see a distinction between green and blue. Now we can argue with all kinds of logical reasons for that, but the point is that there is much in our world we don’t see—for whatever reason—and staying open and flexible seems to bring that hidden ‘magic’ into our awareness.

In the words of Eckhart Tolle, use thought but don’t be possessed by thought. Stay open and observe the wonder around you.

Have you had an animal encounter that spoke to you? Leave a comment.