Okay, So What's the Speed of Dark? 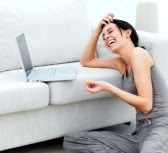 In my ongoing search to uncover my particular style of humor, I had fun this week exploring dead pan humor, also known as dry humor. I know I went over this in my last installment, but I had so much fun, I decided everyone needs a good laugh to start the week. And, because I’ve settled on dry humor as my style, I thought I'd share some examples:


Stephen Wright, got me laughing at his site with:

Last night I played a blank tape at full blast. The mime next door went nuts.


If a person with multiple personalities threatens suicide, is that considered a hostage situation?


If a cow laughed, would milk come out her nose?


Whatever happened to preparations A through G?


Is it true that cannibals don't eat clowns because they taste funny?


Eagles may soar, but weasels don't get sucked into jet engines.


OK, so what's the speed of dark? (borrowed this for today's blog title)

Because some people have difficulty in grasping dry humor (Huh? Was that suppose to be funny?) which  is described in two different ways, I found these explanations for you on group discussion boards on humor (who knew they had them):


Dry humor  relates to being serious, or not appearing to be trying to be funny, and in doing so, it becomes funny or humorous.
Deadpan humor is more about the form of non-comedic delivery in which this type of humor is presented without a change in emotion or facial expression, usually speaking in a monotone manner.


Examples of deadpan humor are:


A few more words of humor for your edification, with minimal explanation:


quip - (clever or witty remark) or (a sharp, cutting or sarcastic remark) a quibble


satire – a literary genre or form—strong irony or sarcasm used with the purpose of shaming or ridiculing
people and/or society into improvement.


tomfoolery - a silly act or behavior


wisecrack - (a smart or facetious remark)


whimsicality or whimsy - odd or fanciful, a product of playful or capricious fancy which may have stemmed from this word whose origin is from 1490-1500:
whim-wham (noun)
1. any odd or fanciful object or thing; a gimcrack.
2. whim-whams. nervousness; jitters: He had the whim-whams after the accident.

Well, that’s all I have on humor, hope it was informative and entertaining. Love to hear your thoughts.

I hope you had a good laugh this week, or at least a chuckle at someone’s dry/deadpan humor.  Why not share it so we can all smile?

I was laughing at line #1. The 'whim-whams?' and 'waggery' those are new ones. Waggery reminds me of British humor, which I love so much or is that a 'quibble?'

Bob Newhart was absolutely the KING of deadpan humor. Thanks for all these lessons.

"Eagles may soar, but weasels don't get sucked into jet engines." Ha! Thank you for the laugh, Cora!

I love dry humor and deadpan deliveries. My kinda humor! Thanks for laughs today!

I love dry humor. I think that's why I love British Comedy.

The Hugh Laurie (House) and Stephen Fry video I mentioned above is a British sketch from a while back. Glad you got a laugh.

Glad you enjoyed it. Sweet dry humor along with a glass of sweet dry wine, now that might just be a perfect evening.

Glad you could relate to this post. Thanks for sharing.

That one got cracked me up, too, every time I reread this post to recheck it. Glad you got a laugh.

Glad you enjoyed it. I have to say, I was cracking up all morning while researching this post.

While doing the research and found Hugh Laurie mentioned, I hadn't put it together that the character he plays on House does have that deadpan delivery (usually sarcastic). The video I listed above is one of his earlier sketches on British TV. A lot of people don't get House or enjoy his dark, dry humor but I do. Thanks for commenting.