Spirit in the Redwoods

I love the redwoods. in has half of the remaining old growth redwoods in the world. Some are five stories taller than the Statue of Liberty. Some have been around two thousand years.

About thirty-five years ago we were traveling to and had stopped and pulled off the road to get out among the huge redwoods. The air smelled wonderful and fresh. I wanted to go off by myself for a few moments and just be in the forest, quietly taking in that wonderful feeling. Being around redwoods raises your spirit and lightens your mood—at least it does mine.

I started down a hill through the trees, the ground covered in ferns as far as I could see. There was light through the trees from a meadow farther down the hill. It was magical. I found a spot and sat down to listen to the forest and meditate a moment.

I was peaceful for a little while, when all of a sudden I got agitated and scared. I felt I should leave right away. I started to walk out but soon felt the imperative to hurry. My thoughts turned to stories of the Yeti thought to inhabit areas like this that are isolated. My heart beat faster. As adrenaline coursed through me, I began running until I reached the car.

“What’s wrong?” my husband asked when he saw me panting.

“I don’t know. All of a sudden I felt something weird while I was down there.” I got my camera out and snapped a picture aimed at the area I had just come from. We left.

Later when I got home and had the film developed, what I found shocked me. On the film was a fog-like area in the center of the shot. It was the profile of a creature with pointed ears. My husband and daughter’s reaction was, “What, I don’t see anything but a white fog.”

So I went and got a marking pen to outline the area of white. In retrospect, I wish I hadn't outlined it because that was the only copy and it could be seen as manipulating the photo. But at the time I didn't care. I knew there was a creature on that film and it was amazing. I wanted my husband and daughter to see the face I was seeing and I had no plans to share it with anyone else anyway.

This week, I spent three days looking for that photo for this post. You know the drill, you put something away for safe keeping and then you can never find it. 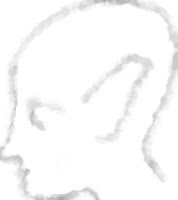 To make matters weirder, this morning I took out a pen to draw what I saw, and then went to load it into the computer to share on this blog and my computer froze. I spent all morning finding a way to get in and unfreeze it. AT LAST, I did. So, barring any further complications, here is the picture of the creature I saw .

This is my last scary story for Halloween, but next week author/astrologer, Hazel Dixon Cooper has graciously agreed to share her ghost story with you. Don't miss it. It's a good one.

I always wondered if that scared and creepy feeling that came over me was caused by this creature, or was he maybe warning me to leave because of some danger I was unaware of? Or maybe I just have a very active imagination. What do you think?

I don't know what you saw, but I know how beautiful and creepy it is through there. I love it, ghosts and all!

That's creepy. I think you saw what your imagination projected.

Clearly a combo of a fertile imagination and a creepmeister fog. Personally, I feel like walking down a street is scary enough. I just watched John Gavagan's TED video called something like "a story about knots and surgeons" which tells how he got stabbed walking down a street. Give me your fog any time!

oooohhh! weird. Don't think we can know if it was something real or not. Then again, if you saw it, it was real to you, even if it was only in your imagination. There is so much we don't know or understand. More creepy stories please. :)

Trust your feelings! If you went from peaceful to agitated without consciously thinking about the place being spooky, it's quite possible your subconscious was telling you something. I've had things happen when I know its my overactive imagination, but others that aren't as easily explained.

That same anxiety has come over me at various times in my life. I did exactly what you did...got the heck out of Dodge! That sense of urgency is for our protection, and I believe it comes from the Holy Spirit or from angels.

Thanks, John. Yes, it is beautiful up there--and it can be creepy.

Could be. But I do have the photo---somewhere in my office!!!

I do have a fertile imagination, I grant you that. I can entertain myself very easily.

If I ever locate the photo, I will do a follow up--unless my computer freezes again-lol.

Amen to that. I was not in any way thinking of being scared. I trust my feelings no matter what my eyes may see.

Thank you, Jodi. Your comment is affirming. I really hesitated posting this--didn't want to be seen as a weird, imagination driven kook. But it happened and I have the picture (somewhere!!!).

It was at the time. But then when I got the photo back from being developed, it changed to amazement.

What we physically see may be only a portion of what actually exists. This story reminds me of a woman I met recently who said she saw strange things at a place in Europe where an apparition of the Virgin Mary is said to have appeared. Have you gone back into those woods recently?
Sally Carpenter

No, I haven't been back that way in many years, but I will definitely stop again, if I get up that way, this time with my digital camera.

Woodland sprites! Hard to say exactly what you saw, an elemental maybe? An earthbound human spirit? Often fear is the only emotion the earthbound can manipulate because it's the last one they remember when they were alive. It's also an easy one to access, to 'push' on in us live ones. Cool story! Would really love to see that picture if you do find it. :-)

It was definitely not human. I always refer to him as an elemental (that covers a lot of territory and a term that can be misunderstood). I felt he wanted me to know he was there and impressed upon me to take a picture where I was feeling the energy. Years later I opened an indoor plant shop I called The Elemental.