The Age of Aquarius, Oh No, Not Again!

Ongoing series of character development using astrology, the Tarot and the archetypes defined by Joseph Campbell. 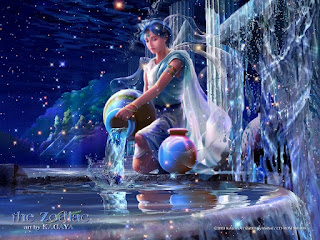 Aquarius is laden with symbolism and mythical origins, and I have to make a distinction before continuing this character-development-for-fiction series.

While trying to figure out how to grapple with Aquarius within one post, I realized I needed to clarify something first. Let’s remove ourselves out of the sign and into the bigger picture for a moment. You have all heard of the “Age of Aquarius” into which we have stepped (there is conflict only as to when, exactly, this happened/will happen). If we link it to the Mayan prophecy of 2012 (a previous post), we see that the old world influences of the previous age are diminishing and the new ones beginning, and we are at least close enough (at or over the threshold) to feel the effects.

On a grand scale, we are stepping out of the old world age of Pisces and into the new world age of Aquarius. We need to get over the idea that love and compassion are reserved for the in-group. There are no in-group and out-group distinctions in Aquarius.

So how does this have anything to do with building a character based on astrology and the tarot? Humor me a moment more, please.

The best sign of transition to the new reality (without mentioning all those pesky mystical elements) associated with Aquarian principles, is the World Wide Web. There are no longer limits to relating to one another now. Without getting into religious distinctions, let me just say that the principles of this new Aquarian age have been already given to us by Jesus, and Buddha who denounced hypocrisy and dogmatic religious intolerance. Yet we still have it, as some cling to their in-group/out-group mentality—a dying breed.

I found an interesting blog post at Enlightening Times that mentioned Jean Houston (Sacred Woundings), who shared a long history with Joseph Campbell (The Power of Myth). Jean had a dream about him and her. She couldn’t figure out what the dream meant but it stayed with her. Without going into the dream, which you can read on the post, a wise elder told her, “Well of course; it’s so simple. He (Campbell in the dream) means the correspondences. You’re supposed to help him find the correspondences between myth and everything else: myth and history, myth and science, myth and psychology, myth and what’s trying to happen in the world, the pathways from the past and the pathways to this future.”

That is the crux of “the Age of Aquarius;” finding the golden nugget of truth in the myth—whether of history, science or psychology—pathways from the past into the future.

What I have been trying to do with this series on building character for your fiction (your mythical stories) is to dig at the heart of the archetypes of who we are (using myth, astrology and Tarot) as we move forward. Our behaviors fit certain patterns, on the positive side or the negative side—really a bit of both. Those patterns can be seen when we look carefully into each astrological sign.

There are lessons there (not shout out loud claims of righteous superiority or exclusionary knowledge found in the Piscean age). Those lessons can be gently viewed and gleaned as we look over the Aquarian hill to see what is at a distance on the other side. There are no absolutes. There are tendencies.

Occult means hidden and refers to ancient knowledge that is purposefully written in a coded form called mythology. That was mandatory in the age of Pisces (unless you didn’t mind being burned at the stake). Now we need to reveal the truth at the heart of the codes. Aquarius, the age of brotherhood, tells us love is the source; at the center of creation. What was hidden can now be revealed.

Whew! Hope that wasn’t too mystical for you. Just remember, I’m drinking from the eclectic cool-aid and sometimes the mystic leaks out.

A great example of this brotherhood idea is the WANA (We AreNot Alone) groups that Kristen Lamb created—writers banding together to help each other with writing, promoting, marketing and technical information—all social media related, using Aquarian principles.

To review past posts, click on the signs that have already been done:
Libra
Leo
Pisces
Taurus
Scorpio
Saggitarius
Capricorn
Gemini

Does my explanation clear things up or confuse you?

Did I get too mystical for you?

Do you think your thinking is more in the Pisces Age, the Aquarian Age, or straddling them both?